A tale of two signal boxes ... and the loss of another friend

Sad news to start again, I'm afraid, in that since my last post word has reached me of the death of David Sellars. Again, I didn't know him as well as other members of the group but David was the first person I met when I went along to one of the Group's sessions at Keighley and instantly made me feel welcome.

Unfortunately, we didn't see much of him over the last couple of years and I last bumped into him about a year ago at Halifax show where we had a good old chinwag.

What I didn't know about was his life outside modelling. The limit of my knowledge was that he was a book binder by trade but he was a very fine craftsman indeed, creating bindings for the Booker Prize winners and the William Hill Sports Book of the Year.

For more about David and his work, please see http://davidsellarsbookbinder.com/About-David-Sellars.php

Modelling time has again been limited due to work commitments, but there has been some progress on Coniston signal box (which now has a roof) and I've made a start on the box for Lightcliffe having put together the window frames for the front wall.

Hopefully get a bit more done today and tomorrow before it's back to work on Wednesday.

'F' is also for Fencehouses and footbridges ... and 'C' is for Coal tank.

Not much progress to report on Lightcliffe since my last post - at least not by me ... I've had a couple of Saturday afternoons on the layout laying cobbles but didn't have my camera with me, so no photos. Must remember to take it with my to the next Group meeting on Saturday.


The layout was on a show as a work in progress at the Keighley MRC's 'Small Scale' show a couple of weeks ago but I wasn't able to attend and haven't had any feedback on how the day went, but hopefully it was a success.

So what have I been up?


Main modelling activity has been progressing my model of Coniston signal box. I built the base for this about three or four years ago and had a go at the upper section but wasn't totally happy with it and set the model aside for a rethink as to how best to do the outside framing.


I eventually settled on a method that seemed to work - Evergreen strip cut to size and then laid on plate glass, squared off using Zona flat squares, and stuck together using Limonene. Leave each assembly to dry and ease off the glass with a scalpel. Each assembly was then affixed to Evergreen boarded plastic sheet which was then cut to size. I did also try using Butanone rather than Limonene but it stuck too well to the glass and there was some furring of the strip as a result. Easy enough to tidy up, but the Limonene was far gentler.


Glazing was then added using microscope cover slips painstakingly cut to size and there things rested for a couple of weeks.

Semi-complete upper panels - glazing bars and glazing still to be added.
The next step was to build the chimney and fireplace into the rear panel (the one with the single window) and then assemble the floor and the side and rear panels and paint the interior. Now this was where I'd gone wrong last time, totally messing up the glazing. A bit of head scratching this time and the decision to try a different method of painting. My paint of choice is usually acrylic but I've been playing around with pastels recently and have discovered the PanPastel range - pans of dry pastel that you can either sponge or brush on. Gave those a try and very impressed with the effect.

So walls and floor painted, internal paneling added and painted and then a few internal bits and pieces added - upright desk, comfy chair (no sign of the Spanish Inquisition) and a representation of a Tyer's Number 6 tablet instrument. Something missing though - the lever frame. Bit more head scratching before inspiration struck - Brassmasters signal levers and some more Evergreen strip. Couldn't quite manage all 36 levers of the prototype but squeezed 32 in.
With the lever frame in place, the front panel was added and the whole thing given a clean with rubbing alcohol. Unfortunately a couple of the microscope slips have cracked in the process but they aren't too noticeable and overall I'm pleased with how it's gone. Much better than my previous attempt. 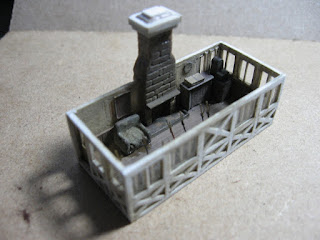 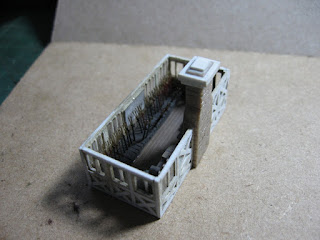 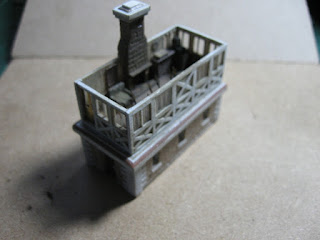 But none of this has got anything to do with Fencehouses or footbridges I hear you cry!
Patience dear reader. For that's the second half of the update. For Bob Jones of Fencehouses has now come up trumps with the etches for the footbridge for Lightcliffe ... and very nice they look too. As ever with Bob he's also sent me some very detailed instructions and I just hope I can do justice to his work. Hopefully can't go far wrong if I heed his words - 'take your time and have fun'! 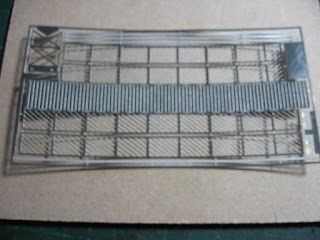 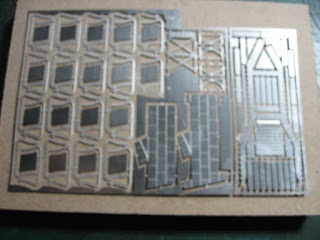 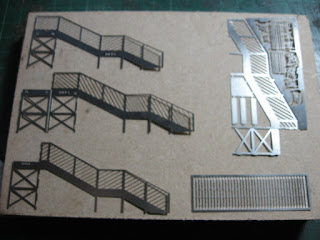 Also included on the etch are some 2mm Furness Railway 'Squirrel Seats" which I commissioned from Bob - looking forward to building those. 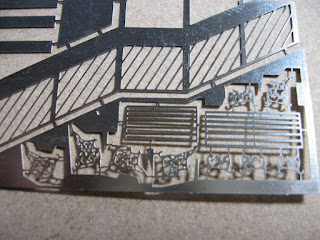 Etches for Furness Railway 'Squirrel Seats"
One other thing to mention before I forget and that's the 2mm Coal Tanks etches I'm looking to get London Road Models to produce. Messages have been posted on RM Web and Western Thunder about this and there's a note in the latest 2mm Association Newsletter but if anybody hasn't seem them and might be interested then please let me know. Expressions of interest only at this stage - a price has yet to be established but moves are also afoot to produce a chassis and a boiler casting and wheels, buffers and fittings are already available from the Association/N Brass Locos.

Right, that's your lot for this time. See you next time.
Posted by David Varley at 13:34 1 comment: