Well, for 2016 the Pennine Area Group has now moved to a new venue, still in Keighley but now at the Aire Valley Railway Modellers - a new group, initially specialising in the smaller gauges, that was formed out of former members of Keighley MRC.

The new clubrooms are on the third floor of a mill near Keighley Station and whilst still being fitted out we will have more space and less need to move the layout around for open days.

Sadly it does also mean we'll need a new test track that sadly will be smaller than the one that used to be at Keighley MRC - a folding circular one is being planned with the idea that this can also be used at exhibitions.

Lightcliffe was moved to the new clubrooms early this year, and as part of the moving process a few issues with the current leg setup for the main boards were found.

It's not that there's anything wrong with the legs, however the current use of wood screws to secure the legs and also the diagonal cross-members to the boards needs some re-thinking.

Firstly, for bolting the legs to the baseboards, I am proposing that we use bolts that can be tightened up with Allen Keys - not unlike those preferred by a certain Swedish Furniture Retailer that I term 'IKEA Bolts' in the lack of any better name. Secondly, for new diagonal cross-braces I propose a much lighter arrangement, with planks, possibly laminated with strips of Ply for strength, secured to the bolt using these B&Q Mini-mounts, shown with the bolts - 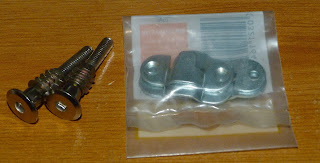 These will be trialled on one of the boards before fitting them to the rest. 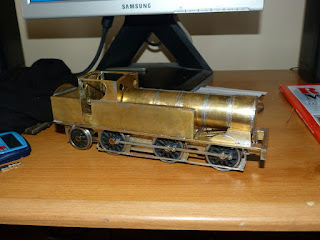 There is some way to go yet - some of the parts from the kit were missing and need fabricating from raw brass, such as the cab roof and coal rails - it'll all be useful experience though. Also, I have a bag full of white metal fittings to complete it, including some replacement cast splashers to replace the etched brass ones in the kit.

Posted by John Ireland at 14:23 No comments: