Since the last post a lot has happened, and over the last almost year and a half of lockdown chances to get to Keighley have been few and far between - mainly to check up on things and that's it.

However, with a hopeful return towards normality group meetings should be starting up again soon and we've been at work on various projects - to start with here's a bit of an overview and recap of what I've been up to over the last year or so.

First up are a couple of loco conversion projects, starting with the Diesels - converted by either having the wheels turned down or by means of replacement wheelsets.

I've done a lot of work to lower the 37s, based on the work detailed in a number of RMWEB posts here, here and here

This, compared with an as yet unmodified one, is the result...

The main thing I can contribute to the techniques described in the links is using Scotch double-sided mounting tape (which is just over 1.5mm think) to fix the tanks on to the chassis to accommodate the lowered body. It's worth noting that since the above picture was taken the wheels have been painted!

Next up is a few Western influenced projects, firstly D9555, a Class 14 which was a 2nd attempt to get it right after a botched initial conversion some years ago - 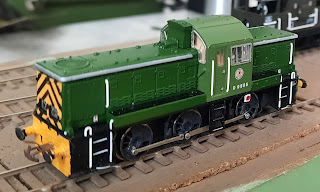 In short - turned down wheels, with 1mm diameter brass tubes inserted in the wheels in the old Farish crankpin holes to allow association crank pins for a replacement con rod from a detailing etch by Steve 'Pixie' Nicholls, which also included replacement buffer beams and finally I needed a load of spare parts from a non-running chassis acquired via Ebay to recover from my first conversion attempt!

Also is a Pannier tank, 3615, converted from the Dapol roughly following Pete King's method in the Feb/Mar 2016 2mm Magazine - 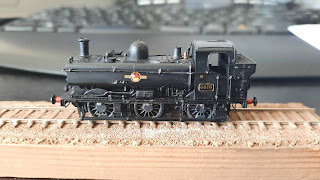 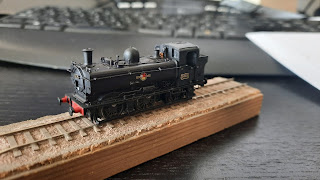 The main difference between mine and his is that the geared drive is just to the middle axle, I ditched the spur gears to the outer axles. After finessing the quartering it runs quite nicely.

All the above do need some weathering as well once I've refined the techniques and more importantly built up the courage!

Finally, there has been some work I've been able to do at home on Lightcliffe, mainly from the perspective of rewiring the control panel and replacing the feedback controller with one with a purer DC output which more suits the newer coreless motors.

Posted by John Ireland at 13:08 No comments: