Firstly because, for one reason and another, I haven't been able to devote much time to modelling.

Secondly because I haven't been able to get to the club since the change of venues and haven't been doing anything to progress the layout.

And thirdly because the Coal Tank build has almost ground to a halt and it's not going too well at the moment.

The first two I can hopefully do something about in the near future.

The third may have to wait a little longer as I'm pushing the boundaries of my skills with a soldering iron and bits of metal and am finding them wanting. In short I've got the loco body just about as far as I can but I'm not happy with it. The boilers gone in between the side tanks ok, but when it comes to the smokebox I've made a bit of a hash of things and am having problems putting them right.

So much so, that I'm going to put the Coal Tank to one side for the moment and go back to the platforms and other structures for Lightcliffe. The etches for the footbridge have been waiting patiently for my attention and there's a lot of white platform surface that needs covering in Yorkshire stone.

The latest progress picture of the the Coal Tank are attached for posterity ... not that I'm giving up on it but I need to set it aside and come back to it at a later date.

Hopefully the next pictures I post will be more progress on Lightcliffe - the next Group meeting's in a couple of weeks and I've got a week off work next week so should be able to get something done. Also might have a trail for some plans for the Brookes Building but need to pay a visit to Halifax with the bloodhound to follow it up - watch this space!

Posted by David Varley at 13:22 No comments:

Sticking Down the Buffer Stops

An extra visit to Aire Valley RMC meant I could sort out the various items stored under the layout and also, after preparing the goods yard area for them on a previous visit, stick down the buffer stops for the good yard and Brookes sidings.

The buffers were all made to the L&Y pattern by Chris Arthur a while ago, however to fit them in the goods yard some plaster that was laid down at the end of some sidings needed removing, as per this slightly fuzzy photo from April - 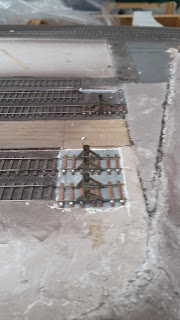 When the photo was taken, the buffers were not stuck down whilst the plaster was removed and some pieces of plastikard adjacent to the sidings were trimmed.

Here's a view of the buffers now glued in place... 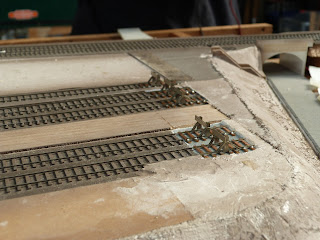 This is the view from the road, even at this early stage with the scenery there's just something about a line of sidings abutting onto a road like this - 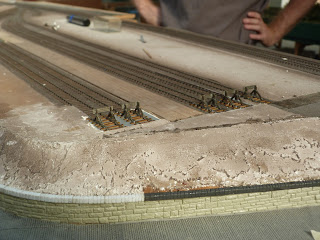 The buffers for Brookes sidings have been done too - 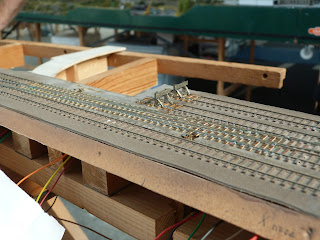 The next PAG meeting is on Saturday 13th - jobs for this meeting include installing extra bus bars under the Halifax line and checking that the newly installed buffer stops don't short anything out in the sidings. Hopefully we should also be able to start on landscaping as well.
Posted by John Ireland at 14:18 2 comments: